The Secret of the Treasure Keepers by A.M. Howell (Usborne, 2022)

There is no law of history any more than of a kaleidoscope.

It is no secret that I am a huge fan of A.M. Howell's books, so to be able to celebrate the publication of her fourth book in three years is a joyous thing indeed. With this new novel, The Secret of the Treasure Seekers, we are whisked away to the eerie East Anglian fenland on a hunt for missing treasure. Howell here creates a mystery not only from the 'present' day of 1948 but also explores the allure of archaeology, that study which provides us with endless questions about (as Ruskin might say) that 'lawless' story of the past.

There are so many delightful details in Treasure Seekers, as well as an exciting plot - as we have come to expect from Howell - twisting and turning until a final denouement that is at once satisfying and not a little unexpected. But the one thing that has really struck me while reading her latest novel is the author's very real sense of place and her ability to transpose both subject and atmosphere between books as though we are looking at different facets of British history through a kind of shifting lens. It is now clear that Howell is building up a body of work that, like a kaleidoscope, views seemingly disparate fragments of our past in endless and similarly 'lawless' patterns.

I marvel at Howell's skill at conjuring up these very different worlds-in-miniature; every time I read one of her books (and I have read Garden five times now!), I am enchanted so effortlessly that I find myself swept into these stories in an almost physical way. We put our eyes to the viewfinder and move from the manor-house grace of The Garden of Lost Secrets to the cultured Cambridge cityscape in The House of One Hundred Clocks, then to the elegant but brooding and oppressive atmosphere of The Mystery of the Night Watchers. But if Garden is all neat lawns and clipped hedges bathed in an autumnal, Edwardian glow, with one smooth turn of the kaleidoscope Howell now paints us a world of - at times - startling harshness in Treasure Seekers. The smell and texture of the earth, freshly churned up, with accompanying cries of hungry rooks and gulls; the increasingly bitter weather and 'razor-thin' air; the musty chill of old barns, haylofts and raid-shelters; all of these things bring to life a very different rural world of post-war Britain.

Certainly in Treasure Keepers, I looked up on more than one occasion surprised that I was not in actual fact standing ankle-deep in soft, yielding mud, in the middle of a stark fenland field, holding a newly unearthed fragment of ancient history and wondering - wondering - about how it came to be there, buried under my feet, all the time. That sort of writing - the rare sort that has the overwhelming power to transport us from now to then and back again - is what helps young (and old!) readers to begin to make sense of those shattered stories of history. Like those bright kaleidoscopic shards of coloured glass, it will dazzle and delight in equal measure and make literary (and perhaps, even, real-life) archaeologists of us all.

While you are reading 'The Secret of the Treasure Seekers' yourself and especially with children, you might like to connect with the book on a personal level by thinking about these prompts. In thinking about the following questions, one for each chapter, I hope you enjoy the book as much as I did. 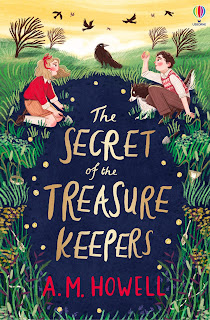 1. If you were in Ruth's position, would you have answered The Telephone Call? Why / why not?
2. Perhaps Mr Knight didn't always want to be the curator of the museum. Do you think he might be good at any of these jobs: policeman, teacher, car mechanic, shop salesman...? (Or not!)

3. If you could, what would you paint as a big Mural on the wall of your bedroom? Why?
4. Ruth says to her mother: 'During the war you used to say it was important to do what was right'. For what reasons do Ruth and her mother think that The Plan is the right thing to do? Why might some people think it isn't the right thing to do?

5. Listen to an extract from (or all of!) Vaughan Williams' In the Fen Country and look at some photos of the East Anglian Fens. (This panorama - with sound effects - is a great start: http://panoramas.nationaltrust.org.uk/wicken-fen/wicken-mill/)  Make a list of words to describe what you feel and sense while doing this. Use these words to help you imagine and describe what it might be like living at Rook Farm.
6. Joe has already made Ruth and her mum feel Not Welcome but also take a look at the description of the house. How many words and descriptions can you find that make even the house itself feel unwelcoming?