'A most awful, hideous place' 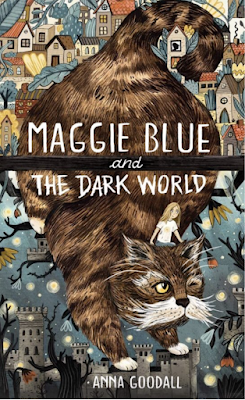 This new adventure story - the first in what will hopefully turn into a series - is quite unlike anything I have read before. An original take on the 'portal story', with much literary allusion and some vivid and engaging characterisation, this is a challenging and rewarding read especially well-suited to those young (and old!) readers who have read Narnia, Harry Potter and His Dark Materials and whose reading diet has taken in a few children's classics along the way, too.

Maggie Blue is an unhappy girl living with her eccentric aunt Esme. Neither school nor home offer her enough in the way of comfort, from having to contend with the bullying Ida and unsympathetic teachers during the day to dealing with the lack of central heating and a comfortable bed at night. But there is something about Maggie. Dot, one of Esme's musical friends, senses a difference in the girl while that difference seems to set her as an ideal target in Ida's eyes. It is when Ida disappears and Maggie discovers strange things happening in the woods that the story then takes an eccentric path.

Perhaps intentionally, the threads of the story start to unravel here and the novel takes turns that for me were genuinely unexpected. Some will feel the presence and madness of 'Wonderland' in Goodall's 'Dark World' ('a most awful, hideous place' as one character calls it), though it is an even more violent and disturbing version of Carroll's already nightmarish land. But because of its richly woven tapestry of allusions, I am sure each reader will find their own connections to past reading.

For me, though, the strongest parallels were with Mozart's and Schikaneder's fairy tale, The Magic Flute. (Is the eponymous character's name a garbled echo of that opera's English title even?) Once Maggie enters The Dark World, scenes evolve - as in Flute - in a kind of weird, improvisatory, devil-may-care way but with a solid internal logic all of their own (The latter point, for me, most emphatically sets Maggie Blue in contrast to the knowing, self-conscious illogicality of Carroll's book.) Further potential connections are also intriguing to consider: the bird-catcher, 'everyman' figure is perhaps taken by a particularly wonderful one-eyed cat called Hoagie who, despite his completely self-centred attitude, is one of the most lovable characters I have met in literature of recent years; Day and Night, Light and Darkness are tangibly to the fore replete with Moon-witches and a 'Sun-god/magician', whose designs on Enlightenment become a key plot point; while also haunting the narrative is a spectacularly dazzling but terrifying creature, bent on evil - a transformed Queen of the Night. I shall not say too much about Maggie's parents here, but their almost-absence throughout (which perhaps may become more of a part of the future sequels) felt like a nod to the challenging tensions between parent(s) and child in The Magic Flute.

As every performance of Mozart's masterpiece will reveal infinite wonders and unseen connections and contradictions, I felt strongly that re-readings of Maggie Blue would uncover many things new. This novel is a truly original piece of work and very much recommended to intelligent, thinking readers of 11+. I, for one, cannot wait for the sequel.

With thanks to Guppy Books who sent me the new paperback edition of Maggie Blue - it was so good, I have put it in the class library...and bought myself the hardback!