The Boy Who Met a Whale by Nizrana Farook (Nosy Crow) 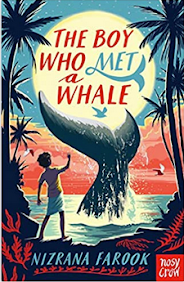 Hot on the heels of the hugely popular The Girl Who Stole an Elephant from Nizrana Farook comes her next Serendib adventure: The Boy Who Met a Whale. This exciting story follows Razi and his sister, Shifa, as they are drawn into the world of Zheng, a boy whose tales of a lost treasure prove too tempting to resist.

Our heroes form a trio whose personal characterisation is beautifully drawn. We feel very early on in the novel that we know these children: Shifa's bravery and fiercely protective nature is strongly presented throughout, while Zheng is passionate and good-hearted, if a little too fond of the sailor's tall tale! Razi's inner sensitivities, especially those that relate to the loss of his father, form the crux of the plot, though this is all so lightly and masterfully done that the climax of the story (when 'the boy meets the whale'!) is at once an intense shock, overwhelmingly beautiful, and deeply moving.

And let's not forget the villains! If the excitement of being trapped in a tropical storm or coming across a pod of whales in the open ocean weren't enough, then the threat and sudden appearances throughout of the dastardly duo, Marco and Cook, certainly intensify the thrills. But they're not the cosy kind of story-book villain - the danger is very real with murderous intent and greedy ruthlessness.

The story would make a perfect choice to share with Year 4 especially. This is a tricky year group for which to provide quality read-aloud books - the children are ready to tackle much longer narratives and have a deepening maturity to cope with the sensitivities that such stories might bring. The plot of The Boy Who Met a Whale is very fast-paced with mutiny, storms, sea-monsters and murderous villains virtually falling over each other as they fall headlong from the pages. As such, the audience will be left breathless at the end of each chapter, calling out for 'just one more'!

The ending is pure satisfaction in the best traditional sense, and leaves ample room for further adventures from our intrepid trio of heroes in the future. I, for one, hope there will be many more!